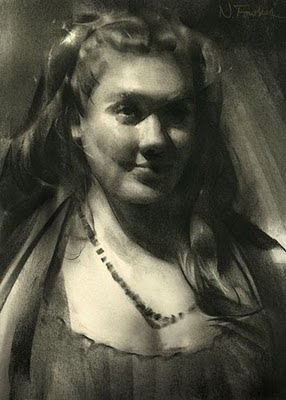 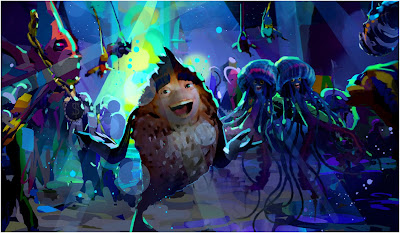 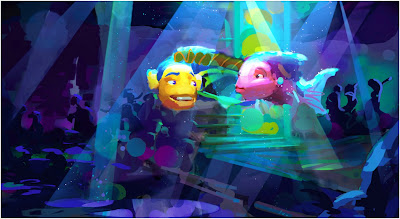 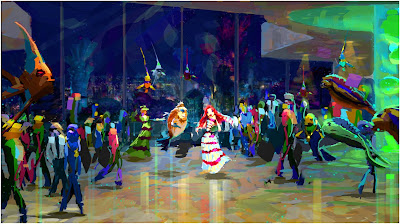 These are color key roughs for the animated movie Shark Tale. This approach was meant to be a fun and splashy way of quickly establishing the lighting and feel of a location in photoshop.
. 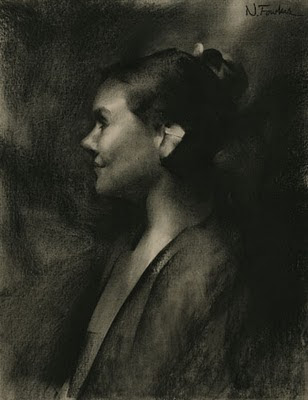 Every once in a while we do a post on science fiction stories here. For me the genre is just endlessly interesting thanks to remarkable storytellers who break new ground with each advancement in technology, biology, evolutionary psychology, etc. If you add into the mix recent discoveries of planets potentially capable of harboring life in other solar systems, suddenly novels of "first contact" have intriguing new playgrounds. A recent novel I haven't been able to stop thinking about is Blindsight by Peter Watts. It in part explores the questions: If an extrasolar intelligence arrived, would it even be possible for us to parse a completely alien psychology? And how would we react if it seemed to refuse contact or took no notice of our attempts to do so? We have a poor track record in dealing with things we don't understand and that frighten us, and Blindsight is a frightening novel. It has a kind of Richard Dawkins fueled bleakness that makes the story compelling but not at all the more hopeful alien contact described in something like Carl Sagan's novel, Contact.
I would very much like to be on the optimistic side but this novel left me hoping that if they're out there, we never meet them. It makes me remember footage from a SETI conference where anthropologist Ashley Montagu said "I can think of no worse fate for the human race than to meet a more advanced alien intelligence" (paraphrased), much to the chagrin of the more optimistic Carl Sagan seated next to him. 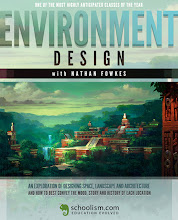 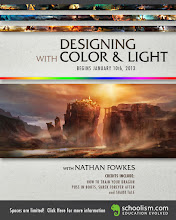 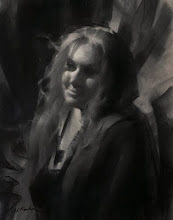